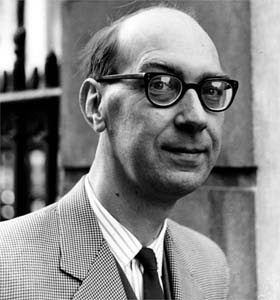 A previously unknown poem by Philip Larkin, has been found in a shoebox. Found by producer Simon Pass amdist internal Hull University communications, 'Dear Jake' is an address to secretary Betty Makereth - one of the three affairs that shaped Larkin's writings. Former Poet Laureate Andrew Motion, who was the first to uncover the lovers' relationship in a 1993 biography, said that the poem is ' a little, new piece of the jigsaw, which gives a very sweet and touching picture of this episode of his life'. The manuscript was found with a card from Larkin, explaining that it should be read alongside his 1968 poem 'Posterity' and saying, 'This is for you. You can sell it later on'.
Posted by Kathryn at 22:04