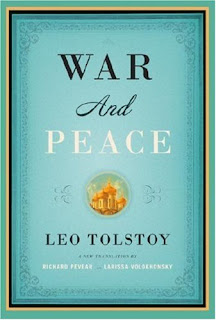 On this day...Leo Tolstoy's 'War and Peace' was sold by the 'Moscow News' in 1867. The now famous literary work was listed thus; 'War and Peace. By Count Leo Nikolayevich Tolstoy. Four volumes (80 sheets). Price: 7 rubles. Weight parcel post: 5 pounds. The first three volumes delivered with a coupon for the fourth'. It seems strange the the novel was so lightly offloaded, considering that that the book was 'five years of unremitting and singleminded labour,' something 'not simply imagined by [Tolstoy] but torn out of [his] cringing entrails'. However, these efforts were soon rewarded when the novel became known as Tolstoy's masterpiece.
Posted by Kathryn at 19:28

Labels: Leo Tolstoy, on this day