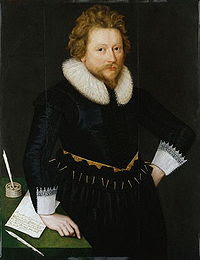 On this day...English playwright John Fletcher was baptised in 1579. The son of a cleric, who later became chaplain to Queen Elizabeth, Fletcher was a child prodigy and entered Cambridge University at the age of 11. Despite this start, little is known of Fletcher throughout his education until he reappeared as a writer for the Children of the Queen's Revels, and a performer at Blackfriars Theatre.

Fletcher's best known works are as a collaborator, especially with Francis Beaumont, such as 'The Maid's Tragedy' and 'Philaster'. So close was their relationship, that they were purported to live in the same house, share each other's clothes and even had 'one wench in the house between them'. Their partnership ended with Beaumont's marriage in 1613, and Fletcher's illness in the same year. Subsequently he became a more firm fixture with the King's Men, collaborating with Shakespeare on 'Henry VIII' and 'The Two Noble Kinsmen'. Fletcher continued to write for the company as a solo playwright after Shakespeare's death, returning to collaboration shortly before his own. One of the most important dramatists of the era, Fletcher died in 1625, at the age of 45.
Posted by Kathryn at 19:22