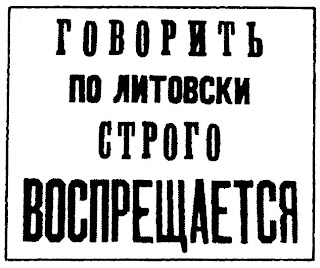 On this day...Lithuanian book smuggler Jurgis Bielinis was born in 1846. 1864 heralded the start of the Lithuanian press ban, during which all Lithuanian language books published in the Latin alphabet were forbidden by the ruling Russian Empire. Tsarist authorities hoped that this measure, part of a larger Russification plan, would decrease Polish influence on Lithuanians and would return them to what were considered their ancient historical ties with Russia.

However, Bielinis showed resistance, taking it upon himself to form the Knygnešiai society - the largest contemporary book smuggling organisation. Nicknamed 'The King of the Book Carriers', Bielinis was actively sought by the authorities, who promised a large monetary reward for his capture after he had escaped their guards at least five times. During the 31 years of his activity, it is estimated that he and his society illegally brought about half of all Lithuanian books from East Prussia into the Lithuanian mainland during the entire press ban. Bielinis died in 1918 at the age of 71.
Posted by Kathryn at 20:12