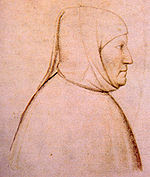 On this day...Famous Italian poet and 'Father of Humanism' Francesco Petrarca, or Petrarch, died in 1374 at the age of 69. Born in Tuscany, Petrarch spent much of his early childhood in Florence before leaving with his family to Avignon to follow the flourishing papacy of Pope Clement V. There, much against his wishes he was schooled in the practice of law - a profession he could only escape from upon the death of his parents. Instead he pursued his love of classical literature, creating his own Latin epic 'Africa', and his disdain for the ignorance of the intervening centuries led Petrarch to be credited with creating the concept of the 'Dark Ages'.

Although he fulfilled many roles throughout the rest of his life - scholar, diplomat, priest - Petrarch is best known for his poetry, in particular, that devoted to Laura. The identity of the woman is unknown, yet she has become famous world over as the original Petrarchan ideal, which writers such as Sidney and Shakespeare have since incorporated in their own works. 'Il Canzoniere', or 'The Songbook', mainly written in sonnet form, alongside 'Secretum' and 'Itinerarium', Petrarch's guide to the Holy Land, have ensured his place among the greatest and most influential of the world's writers.
Posted by Kathryn at 10:57

Labels: on this day, Petrarch