The Adventures of Sherlock Holmes continue.... 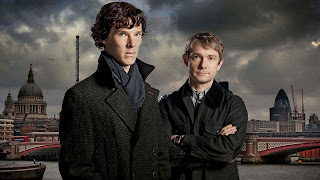 Following another action packed series, the BBC have announced that 'Sherlock' will return for a third installment. Starring Benedict Cumberbatch in the main role, the series has been praised by both critics and audiences alike, with viewing figures of 10.7 million for its first episode.

Its creator, Stephen Moffat, had been coy when asked about a possible return, telling the BBC that there was 'no guarantee we'll be bringing him back'. Yet following the series' conclusion, 'The Reichenbach Falls' last night, Moffat wrote on Twitter, 'Of course there's going to be a third series - it was commissioned at the same time as the second. Gotcha!' The commission echoes Conan Doyle's own ressurection of the character who had supposedly been killed off after toppling off the Reichenbach Falls with Moriarty in 'The Final Problem'. Dates of filming and broadcasting have yet to be announced.
Posted by Kathryn at 11:35