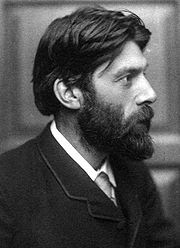 Robert Bridges, an English poet was born in 1844. Originally a student of medicine and a physician at Great Ormond Street Hospital, he was forced to retire through lung disease and so took up writing poetry and literary criticism. He was rewarded for his efforts by being made Poet Laureate in 1913, a position he held until his death in 1930. Perhaps his most famous work was 'Milton's Prosody', an examination of John Milton's use of blank verse; and his best known poem, 'The Testament of Beauty'.
Posted by Kathryn at 08:58