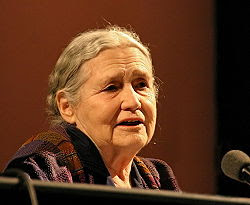 Doris Lessing was born in 1919. She is an Iranian-born British writer, most famous for novels such as 'The Golden Notebook' and 'The Grass is Singing'. However, she also advocated combatting social injustice, being an active campaigner against both nuclear arms and the South African Apartheid. In order to demostrate the difficulty that new authors face in trying to get published in print, she wrote two novels under a pseudonym. To prove her point, both were declined by her UK publisher. She won the Nobel Prize for Literature in 2007, at the age of 87, making her the oldest recipient of the prize to date.

Labels: Doris Lessing, Nobel Prize for Literature, on this day