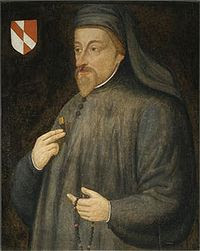 Geoffrey Chaucer, a poet, philosopher and diplomat, died in 1400 at the approximate age of 56. His best known work is 'The Canterbury Tales', charting the stories of a group of pilgrims from Southwark to Canterbury; two tales were written in prose, the remaining twenty two in verse. Chaucer was praised for introducing the use of a recognised English dialect as opposed to Latin or French, more commonly written in at that time. He is recorded in the Oxford English Dictionary, as being the first to use many common English words in his writings, such as: acceptable, angrily and arsenic.
Posted by Kathryn at 11:29

Labels: Geoffrey Chaucer, on this day, The Canterbury Tales