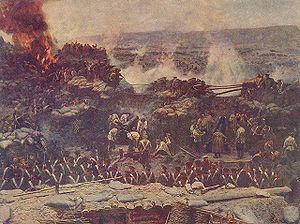 This day also saw the 1854 Crimean War battle in Balaklava, during which 250 men were killed or wounded and 400 horses were lost. When Alfred Lord Tennyson read a report of the incident, in The Times five weeks later, he wrote 'The Charge of the Light Brigade' , most famous for the lines: 'Theirs not to make reply/Theirs not to reason why/Theirs but to do and die'. Yet his interest in the Balaklavan soldiers did not stop there; some years later, a charity drive was undertaken to provide money to the surviors, many of whom were destitute. Tennyson wrote 'The Charge of the Heavy Brigade' to galvanise support, but much of the money raised was given by the politicians to other causes. This prompted Rudyard Kipling to write 'The Last of the Light Brigade', to reveal the scandal to the public.
Posted by Kathryn at 11:48