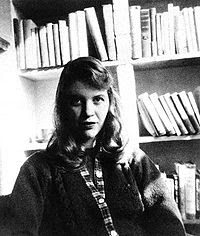 The American poet and prose writer Sylvia Plath was born, in 1932. Born in Massachusetts, she attended Cambridge University, and it was there that she met and married poet Ted Hughes, a later Poet Laureate. She is known as one of the main contributors to the genre of confessional poetry - in which the poem shares intimate details surrounding the poet's life. Although famous for her poetry, perhaps her best known work is in prose - the semi-autobiographical 'The Bell Jar' written under the pseudonym Victoria Lucas. After numerous suicide attempts, many initiated by her husband's affair, she finally succeeded in February 1963; dying at the age of 30.
Posted by Kathryn at 18:32