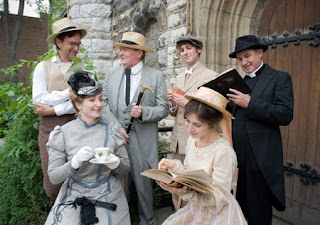 The George Bernard Shaw play, 'Mrs. Warren's Profession', was performed in the Garrick Theatre, New York, in 1905. All participants, cast and crew, were arrested for obscenity, yet only the house manager was ever convicted. The play had caused outrage in the reserved society of Victorian England, and was banned due to its confrontation of prostitution, and implications of incest. Shaw himself, however, noted that he wrote the play, 'to draw attention to the truth that prostitution is caused, not by female depravity and male licentiousness, but simply by underpaying, undervaluing, and overworking women so shamefully that the poorest of them are forced to resort to prostitution to keep body and soul together'. Therefore, as opposed to writing a morally skewed play in order to shock both authorities and public alike, he wrote it for didactic means, attempting to educate and open eyes to the society around them. The play wasn't legally performed in Britain until 1926.
Posted by Kathryn at 18:30