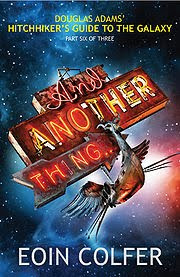 'The Hitchhiker's Guide to the Galaxy', by Douglas Adams, is one of the most recognisable and famous sci-fi novels; adapted numerous times for both TV and radio. The sixth instalment has recently been published, yet with a twist; following Adams' death in 2001, this novel has been written by the Irish writer Eoin Colfer, of Artemis Fowl fame. Unlike the previous four, the title of the sixth book is not a quote taken from the first, but is taken from the third, 'So long, and Thanks for all the Fish'. Adams had long been cited as wanting a sixth book, stating that he wanted 'to finish Hitchhiker on a more upbeat note.' 'And Another Thing...' was published on 12th October 2009; the thirtieth anniversary of the first.
Posted by Kathryn at 18:54