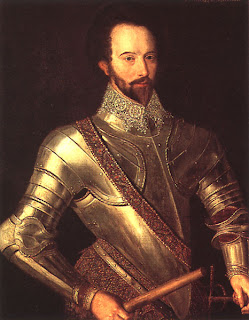 Sir Walter Raleigh, courtier to Queen Elizabeth I, died in 1618. Perhaps more famous for bringing both potatoes and tobacco to England from his voyages to the New World, Raleigh also wrote poetry, considered to be one of the era's 'silver poets' by C.S. Lewis. Fighting for recognition amongst better known contempories such as John Donne and Christopher Marlowe, Raleigh's best work could be said to be 'The Lie', a social criticism condemning institutions such as the Church and courts; stating the latter 'shines like rotten wood'. He also wrote 'The Nymph's Reply to the Shepherd', as a reply to Marlowe's 'The Passionate Shepherd to his Love'; a poem which has since seen responses from John Donne, Cecil Day-Lewis and Ogden Nash.
Posted by Kathryn at 17:45