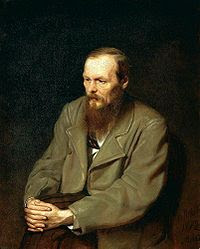 Fyodor Dostoyevsky, the Russian Novelist, was born in Moscow in 1821. Most of his literary works are of a nature which delves into human psychology, and as such, he is often said to be a foreshadowing of 20th century existentialism; a philosophical school of thought in which emotions, responsibilities and induvidual existance are most prominent. In 1849, Dostoyevsky was put in prision for being part of Petrashevsky Circle, a literary discussion group strongly opposed to tsarist autocracy. After being sentanced to death and waiting outside to be shot by a firing squad, his sentance was reduced to four years hard labour in Siberia; an experience he described like being 'shut up in a coffin'. His most famous works, written after this experience, are 'Crime and Punishment' and 'The Brothers Karamazov'.
Posted by Kathryn at 08:44