Another side to Austen?... 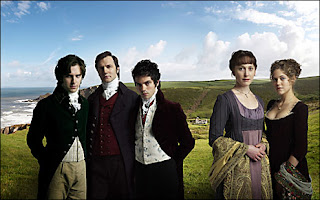 Also on this day, 'Sense and Sensibility', Jane Austen's first novel, was published in 1811. Austen wrote the original draft of the novel, as 'Elinor and Marianne', when she was only 19; and the two title characters are thought to be based on her sister Cassandra and herself. The novel, published under the pseudonym 'A Lady', was advertised as being 'new', 'extraordinary' and 'interesting'. Early reviewers stated it to be 'a genteel, well-written novel' and 'just long enough to interest without fatiguing'; however it is said that Austen was at her most satirical, the writer Virgina Woolf suggesting that 'it seems as if her characters were born merely to give Jane Austen the supreme delight of slicing their heads off'. The 750 copy first edition sold out in a year and a half, Austen making a profit of £140.
Posted by Kathryn at 09:21