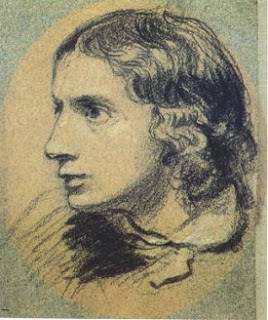 Arguably one of the most famous English poets in history, John Keats, was born in 1795. Although his work was not well received in his lifetime, Keats, together with Percy Bysshe Shelley and Lord Byron, is now cited as the one of the cornerstones of the romantic movement in poetry; his works going on to influence and inspire such poets as Alfred Lord Tennyson and Wilfred Owen. Yet his life was tragically short. Soon after his brother Tom died from tuberculosis, Keats himself began to show symptoms of the disease. In 1820, with the signs becoming more pronounced, Keats left for Italy with his friend Joseph Severn. He died in 1821, in a house on the Spainish Steps in Rome, now the Keats-Shelley Memorial House, where works, correspondence and original furniture remain. Known for his florid description and rich imagery, Keats most famous works are 'Ode to a Nightingale' and 'Endymion'. His death inspired another great work, 'Adonis', by Shelley.
Posted by Kathryn at 15:48