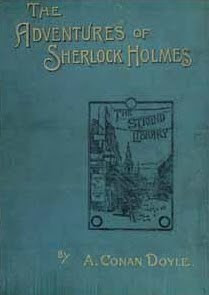 This day also sees the first publication, in bound form, of Sherlock Holmes. 'The Adventures of Sherlock Holmes', by Arthur Conan Doyle, consists of twelve stories, each first induvidually published in the Strand Magazine over the span of a year. Formalised into a book in 1892, becoming the first Holmes collection, the stories include 'The Adventure of the Blue Carbuncle' and 'A Case of Identity'. The book was banned in 1929 by the Soviet Union who mysteriously cited occultism as its logic. Doyle wrote a further four collections of short stories and four novels revolving around the fictional detective, who is once again to be adapted for the screen; 'Sherlock Holmes' will be released on December 25th 2009.
Posted by Kathryn at 16:12