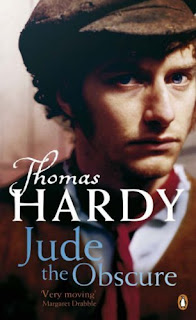 'Jude the Obscure', one of the most controversial novels of its time, was published in 1895. Its embodiment of modern ideas and themes, many too modern for the religious and prudish Victorian society to grappple with, led to it being branded 'Jude the Obscene'. Thomas Hardy, following the moral outcry over his previous novel, 'Tess of the d'Urbervilles', had chosen to entertain the notions of redundancy of marriage and religious hypocrisy; a bold statement, yet one which heralded the end of his prose writing, he himself stating 'a man must be a fool to deliberately stand up to be shot at'. For his remaining thirty-two years, Hardy wrote only poetry and drama, yet continued to make political statements, most notably against war in 'The Man He Killed'.
Posted by Kathryn at 16:12

Labels: Jude the Obscure, on this day, scandal, Thomas Hardy