Darwin gone down the toilet?... 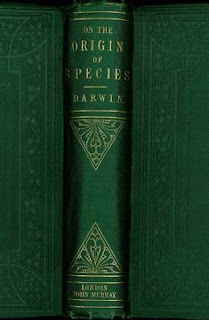 A rare book, kept in the toilet, was sold at auction earlier this week for over £100,000. Kept in the guest lavatory, a first edition of Charles Darwin's 'On the Origin of Species', had been bought 40 years ago for just a few shillings. One of only 1,250 copies produced in 1859, the owner first realised the significance of the book when visiting a Darwin exhibition earlier this year; recognising a picture of its gilt decorated spine and green cloth cover. Described as 'lightly bumped' around the edges, it went on sale at auctioneers Christie's earlier this week, on the date of its 150th anniversary and fetched £103, 250.
Posted by Kathryn at 13:47