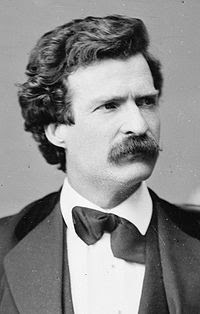 Samuel Clemens, better known by pen name Mark Twain, was born in 1835. Twain began his literary career at the age of 12, contributing articles and sketches to the 'Hannibal Journal'; a newspaper owned by his brother. Yet deciding that it held better monetary prospects, with wages approximately equivalent to that of $155,000 today, Twain opted instead for the job of a steamboat captain; a job he held until the start of the civil war two years later. This conflict, as well as his upbringing in slave state Missouri, left him with a deep impression, and so slavery appears as a reoccuring theme throughout his works. After his brief nautical career, Twain moved back to writing, and it was then that he made his first breakthrough, with novel, 'The Celebrated Jumping Frog of Calaveras County'. However, his two most popular works are undoubtedly 'Adventures of Huckleberry Finn' and 'The Adventures of Tom Sawyer'; the former has come to be recognised as the 'Great American Novel'. Twain suffered great tragedy in his life, losing prematurely his father, daughter and wife; leading to bouts of depression. Twain himself died in 1910, at the age of 74.
Posted by Kathryn at 21:45