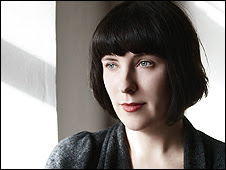 The winner of the John Llewellyn Rhys Prize has been announced today as Evie Wyld. The debut novelist beat off competition from Booker Prize winner Aravind Adiga and Orange Prize winner Chimamanda Ngozi Adichie. Set in eastern Australia, where her family own a sugar cane farm, 'After the Fire, A Still Small Voice', was acclaimed by the judges as, 'fantastically mature... never showy, a slow burn that drags the reader in...Wyld captures the inflections of male speech and male bonding in a way that feels both acute and realistic.' Wyld, a bookseller from Peckham, walks away with a £5,000 prize. Previous winners include Margaret Drabble and Andrew Motion.
Posted by Kathryn at 22:00