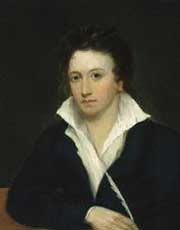 Percy Bysshe Shelley's 'Adonais' was first published in England in 1821. Perhaps one of the most poignant elegies in the English language, Shelley's poem was written for fellow romantic poet John Keats, who had died earlier that year at the age of only 25. The title is thought to be a combination of Greek god Adonis and Hewbrew for Lord, Adonai; and so idealised Greek themes of beauty, nature and romance feature heavily throughout. Having been introduced in 1816, Shelley and Keats were close companions; Shelley saying of the latter, after inviting him to stay; 'I am aware indeed that I am nourishing a rival who will far surpass me and this is an additional motive and will be an added pleasure.' When Shelley died in a year later, at the age of 22, his body was found washed up with a copy a Keats' work in his pocket.
Posted by Kathryn at 18:36