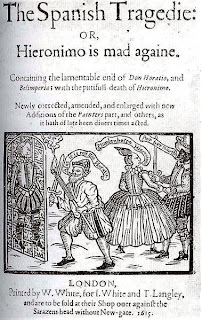 English dramatist, Thomas Kyd, was baptised in 1558; the first record available of his birth. Kyd is best known for his authorship of 'The Spainish Tragedie'; yet, despite being recognised in his own time, this was only attributed to him in 1773. This led to further scholarly study into his works; even producing a theory that he wrote a 'Hamlet' which pre-dated Shakespeare's. Kyd's respect spread from his pan-European audiences to his contempories, Ben Jonson evelvating him to the same level as Christopher Marlowe; with whom he shared lodgings. He died in 1594, recognised as a key figure in the development of Elizabethan drama and plot. 8 years after his death, Jonson is noted as being payed by Philip Henslowe for additions to the play.
Posted by Kathryn at 22:31