Take a sad song and make it better... 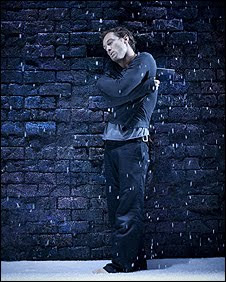 It has been announced that Broadway's 'Hamlet' is officially a success, bringing in profit after less than three months. The production, starring Jude Law, moved from London's Wydham's Theatre to New York's Broadhurst Theatre in October, having already proved a commercial hit in the West End. Law, returning to Broadway for the first time since 1995, is the second famous face to grace the role of the Danish prince in as many years, David Tennant proving highly popular in the RSC's production. Following up from that, many expected Law to fail, yet he received positive reviews; the Telegraph calling his performance one of 'rare vunerability and emotional openess.' 'It is heartening', says the show's director, 'that Shakespeare can be a commercial success on Broadway.'
Posted by Kathryn at 23:04