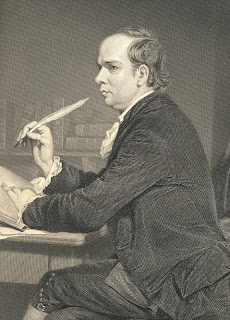 Anglo-Irish playwright and poet Oliver Goldsmith, is though to have been born in 1730. There are disputes as to his exact date of birth; theories ranging from 10th-29th of November and from the years 1727-1731, but 10th November 1730 is now accepted by most. His works span the genres; from the romantic ballad of 'The Hermit', to the novel 'The Vicar of Wakefield'. The latter proved very popular among 18th and 19th centuries audiences, being cited in many contemporary works such as Austen's 'Emma', Dickens' 'David Copperfield', and Shelley's 'Frankenstein'. Yet arguably his most famous work is of the dramatic genre. 'She Stoops to Conquer', a comedy of manners, has gained lasting appeal, being adapted numerous times for the screen, including a recent 2008 series. Goldsmith died in 1774, at the age of 43.
Posted by Kathryn at 17:38