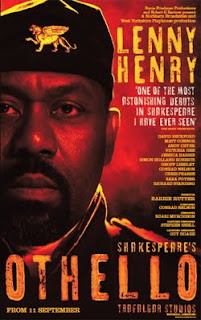 The nominations for the London Evening Standard's theatre awards were released yesterday. Among the most notable, is Lenny Henry in the category of 'Outstanding Newcomer', despite being 51 years of age. He made his stage debut as Othello last year, first appearing at Northern Broadsides theatre, and currently, following remarkable success, is performing at Trafalgar Studios. Critics have called his performance 'one of the most astonishing debuts in Shakespeare...it is impossible to praise too highly Henry's courage in taking on so demanding and exposed a role, and then performing it with such authority and feeling.' Also nominated is Rachel Weisz for 'Best Actress', for her performance in Tennessee Williams' 'A Streetcar Named Desire' at the Donmar Warehouse. The full list of nominations can be found here. The winners will be announced on the November 23rd.