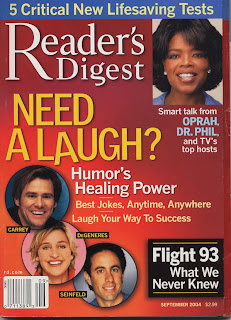 American DeWitt Wallace, founder of 'Reader's Digest', was born in 1889. Injured in World War One, Wallace spent his 6 months recovery time reading and researching magazine articles. He then proceeded to condense them in something that he believed was more readable; becoming more and more convinced that the general public shared his ideals. So he sent to a publishers, the idea of a periodical consisting of a wide variety of abridged articles - it was refused. In the meantime, Wallace had married, and after this rejection he and his wife, Lila, decided to set up the magazine by themselves, publishing their first issue in 1922, with a run of 1,500 copies. The business rapidly grew, circulation reaching 200,000 in 1929 and allowing the use of original articles, many reflecting the Repulican, anti-communist views held by Wallace. By the end of the 20th century, 'Reader's Digest' had a circulation of more than 17 million in 20 languages; the largest circulation of any publication in the world. Wallace died in 1981, having received the Presidential Medal of Freedom in 1972.
Posted by Kathryn at 17:59