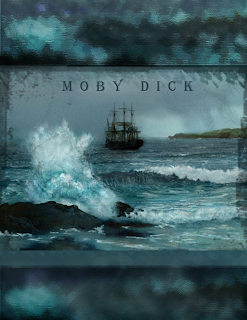 Herman Melville's 'Moby-Dick' was published in New York in 1851. It had been published in Britain one month previous, entitled 'The Whale', yet had contained an incomplete and rearrranged ending, rendering a hostile reception on its American publication. Contemporary critics said of it; 'The idea of a connected and collected story has obviously visited and abandoned its writer again and again in the course of composition.' Maintaining only a fragile readership in his lifetime, Melville's death in 1891 signalled a period in literary obscurity for 'Moby-Dick' and many other of his works; a decline only reversed after the end of World War One. The war saw many people questioning the foundations of their culture and society, leading to the modernist movement; a movement whose ideals Melville had reflected and so the novel found increasing relevance. Its most famous line being 'Call me Ishmael', 'Moby-Dick' was voted in 2008, to be Massachusetts' offical 'epic novel'.
Posted by Kathryn at 16:53