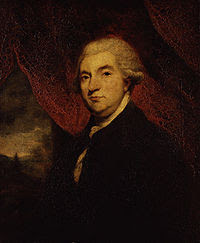 James Boswell, the Scottish diarist, set out for London in 1762. During the eight and a half month stay that followed, Boswell wrote his 'London Journal'; he documented each detail of the city, in which he stated that 'we may be in some degree whatever character we choose.' The most significant event recorded was his meeting with prolific essayist, poet and author Samuel Johnson; an event which led to the creation of Boswell's most famous work, 'The Life of Samuel Johnson'. Often said to be the greatest biography ever written, it earned Boswell the reputation he had long sought for; indeed the word 'Boswellian' has evolved into the English language, meaning one who studiously records the deeds of others. Many of Boswell's works were not discovered until the 1920s; over 8,000 pages of manuscript including records of meetings with playwright Oliver Goldsmith and philosopher Edmund Burke. Boswell died in 1975, aged 54.
Posted by Kathryn at 14:00