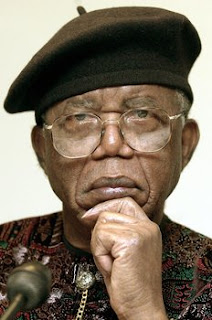 Nigerian novelist, poet and social critic Chinua Achebe, was born in 1930. Starting his career at the Nigerian Broadcasting Service, Achebe soon became captivated by world religions and cultures, especially those of a traditional African nature. This fascination soon led to a literary career, writing his first, and still probably best known, work 'Things Fall Apart'in the late 1950s. He continued to write through the next few decades, yet soon found a niche in the political scene. 1967 saw the province Biafra attempting to gain independence from Nigeria; a move which Achebe fully supported, even serving as a ambassador of the new nation. Yet by 1970, it had been taken back by the government, leaving Achebe ostracised from politics due to the corruption he felt to be so prevalent. He moved to the U.S, delivering lectures; including one in which he described Joseph Conrad as a 'racist'. His best known poetical work is 'Vultures', and he continues to speak passionately on African issues at the prestigious Ivy League Brown University.
Posted by Kathryn at 17:19

Labels: Chinua Achebe, on this day