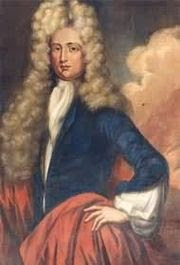 English playwright and poet Thomas Shadwell died in 1692, at the age of 50. In relative terms a literary success, Shadwell was awarded the title of Poet Laureate in 1689, succeeding contemporary John Dryden. Yet it is for his relationship with Dryden, mainly conveyed through text, that he is best remembered; the two swapping some three satirical pieces each, about the other. It was Dryden who came out on top; the protagonist of his work 'Mac Flecknoe', the King of Dullness, giving his crown to Shadwell, who is described as 'confirm'd in full stupidity'. While many of their debates took to a political or religious line, both diametrically opposed on those issues, the pair were also known to contemplate more intellectual ideas, such as whether Ben Jonson or Shakespeare were a better playwright. The best works of the man who 'enjoyed a popularity in his own day which is not easily explicable in ours', are play 'Epsom Wells', and poem 'Dear Pretty Youth'.
Posted by Kathryn at 19:46