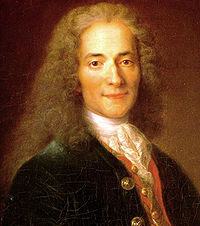 François-Marie Arouet, better known by his pen name Voltaire, was born in 1694. Voltaire was a student of classical languages, and it was from this that his pseudonym came; an anagram of Arovet Li, the Latinised version of his surname, just one of the 178 aliases he is known to have taken. Part of the French Enlightenment movement, which included Jean Jacques Rousseau, Voltaire believed in reason as the basis of authority, questioning the traditional institutions and customs of the time. Although a philosopher by first trade, he soon became a prolific writer of almost every literary form; including poetry, drama, novels and more than 20,000 letters. His sharp wit led Voltaire to being imprisioned in the Bastille, then exiled to England, sparking his subsequent attempts to reform the French judicial system. His best known work remains 'Candide', and he died in 1778 aged 83. When asked on his deathbed by a priest to renounce the devil and turn to God, he is alleged to have replied, 'Now is no time to be making new enemies'.
Posted by Kathryn at 14:02