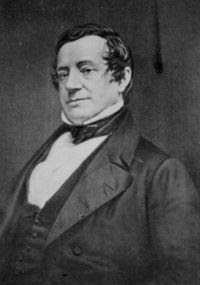 American author and historian, Washington Irving, died in 1859 at the age of 76. He made his literary debut in 1802, writing letters to the 'Morning Chronicle' under pseudonym Jonathan Oldstyle. Having moved to England in 1815 to help the family business, Irving furthered his budding enthusiasm for writing, and by 1819 he had published his best known work, 'The Sketch Book of Geoffrey Crayon. The collection of short stories were published in seven installments, and included 'Rip Van Winkle' and 'The Legend of Sleepy Hollow'. Also a historian, Irving wrote numerous biographies of figures such as George Washington, Oliver Goldsmith and Christopher Columbus. He is among the first American authors to gain acclaim in Europe and preceeding other trans-Atlantic successes Nathaniel Hawthorne, Herman Melville and Edgar Allan Poe. Irving is the reason behind two slightly more obscure pieces of trivia; he popularised the name 'Gotham' for New York city, as used in the Batman comics, and also introduced the dubious belief that the people of the Middle Ages thought the Earth to be flat.
Posted by Kathryn at 15:06