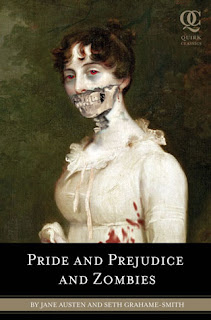 It has been reported that Natalie Portman is to star in a film adaptation of novel, 'Pride and Prejudice and Zombies'. Seth Grahame-Smith's book, released earlier this year, went to number three on the New York Times best-seller list and publishers are set to release a second title; 'Sense and Sensibility and Sea Monsters' in early 2010. In a twist on the Austen classic, Grahame-Smith's novel sees the narrative take place as the dead rise from the grave, with all five Bennett sisters trained in the martial arts to combat the zombies. According to Variety, Portman is set to play protagonist Elizabeth Bennet.
Posted by Kathryn at 17:23