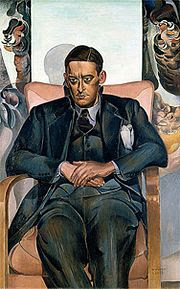 T.S. Eliot's 'The Wasteland' was published in 1922. Arguably his most famous work, the poem is often considered a benchmark for modernist literature; especially considering that Joyce's 'Ulysses' and Woolf's 'Jacob's Room' were published in the same year. It is striking for its fusion of voice, location and image; blending Shakespearian lexis with that of contemporary London. Although the initial reception was mixed, one author deeming it 'a practically meaningless collection of phrases, learned allusions, quotations, slang, and scraps in general', the poem found an unlikely admirer in the Queen Mother. During World War Two, Eliot was invited to read the poem to the Royal Family, and she said of the visit; 'We had this rather lugubrious man in a suit, and he read a poem…I think it was called The Desert. And first the girls [Elizabeth and Margaret] got the giggles and then I did and then even the King.' Eliot was recently voted the 'nation's favourite poet' in a BBC poll.
Posted by Kathryn at 19:37