Note to Self: Books sell... 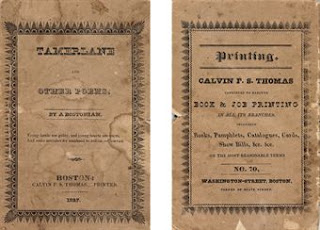 Yesterday at Christie's, saw one of the most impressive literary auctions in some time. Film producer William E. Self sold his entire library of rare editions; 144 lots producing a sale total of $4,896,625. The highlights were two collections of poetry by Edgar Allan Poe; the first, a handwritten manuscript which sold for $830,500, the second, a first edition of 'Tamerlane and Other Poems', which went for $662,500. The list of other authors' work is extensive, and includes names from both sides of the Atlantic, such as; Jane Austen, the Bronte sisters, Lord Byron, Charles Dickens, Robert Louis Stevenson and Walt Whitman. The full list of lots, including pictures and details, can be found here
Posted by Kathryn at 11:51