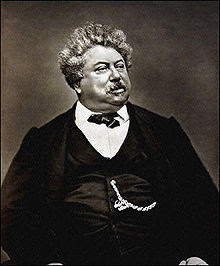 French author Alexandre Dumas died in 1870, at the age of 68. Grandson of the Haitian artillery High Commissioner, Dumas family had numerous military connections; his own father was a general in Napolean's army. It was this that inspired much of Dumas' subsequent literature, his widowed mother regaling her son with stories of his father's military heroism. A participator in the political scene, Dumas helped to oust Charles X and place Louis-Philippe I on the throne, ending press censorship and revitalising the ecomony; both crucial for helping Dumas to achieve his success. Dumas' works have been translated into almost 100 languages and have been the inspiration for over 200 films; his most famous being, 'The Count of Monte Cristo' and 'The Three Musketeers'. Dumas' body was exhumed in 2002 to be buried in the Panthenon alsongside French literary greats Emile Zola and Victor Hugo. President Chirac, present at the ceremony, said of Dumas; 'With you, we were D'Artagnan, Monte Cristo, or Balsamo, riding along the roads of France, touring battlefields, visiting palaces and castles — with you, we dream.'
Posted by Kathryn at 11:25