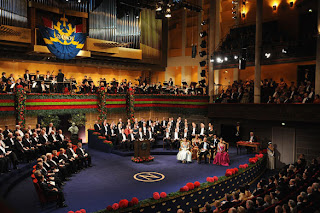 Today, on the anniversary of Alfred Nobel's death, five new Nobel Laureates received their prizes at award ceremonies in Olso and Stockholm respectively. Representing fields from physics to peace, the list of new Laureates included Herta Muller; the 2009 winner for literature. The Romanian author, best known for works about life in the Communist regime, was rewarded for 'the concentration of poetry and the frankness of prose' which 'depicts the landscape of the dispossessed'. Earlier this week, 'stunned' Muller, who receives £900,000, gave her Nobel Lecture, a tradition which is always held in the days prior to the ceremony. Former Literatures Laureates include William Butler Yates, George Bernard Shaw, John Steinbeck, Seamus Heaney and even Winston Churchill.
Posted by Kathryn at 17:37