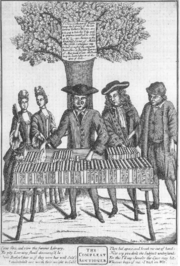 English bookseller and publisher Edmund Curll died in 1747, around the age of 72. Operating under the maxim, 'all publicity is good publicity', Curll began his career 1705 after a seven year apprenticeship. Basing his store on exploitation of opinion, he began to publish paradoxical works on politics, medicine and religion; pornography and Christian literature both occupying his shelves. He even wrote books himself, one, 'The Charitable Surgeon', written under the pseudonym of a trusted physician, advising that the best medical cures were to be found at Curll's shop. As well as his own, Curll also published books written by others, more often than not, without their consent. Matthew Prior and Jonathan Swift were both subject to this, but the worst affected was Alexander Pope. Curll's name is now readily identified with a long running dispute with the poet, including a series of retalitory poems starting with one of Pope's most famous works, 'The Dunciad'. For several years after, the word 'curlicism' entered the language as a synonym for literary indecency.
Posted by Kathryn at 16:48