Ulysses drinks life to the lees... 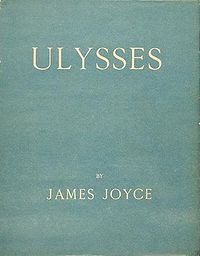 This day also saw a infamous court ruling over James Joyce's novel, 'Ulysses' in 1933. The novel, written over a seven year period, had been serialised in the U.S. magazine 'The Little Review' in 1918, but following the publication of a particularly lewd passage for the time, the New York Society for the Supression of Vice took action against it. A trial declared the magazine obscene in 1921, leading to the book being banned in the U.S; mirroring a similar scenario in Britain. However, in 1933, a federal judge ruled against the original verdict; a decision that was confirmed by the Court of Appeal in 1934 and led to the book being reinstated in both countries. Joyce's novel, written using a stream of conciuosness technique, contains approximately 265,000 words from a 30,030 word vocabulary. It is based on Greek mythological hero Odysseus, and is often described as one of the most important works of modernist literature.
Posted by Kathryn at 14:24