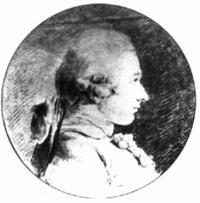 French writer and revolutionary, Donatien Alphonse François,Marquis de Sade, died in 1814 at the age of 74. Born into an aristocratic family, the Sades claimed to be the oldest Frank-descended nobility, and so the men alternated between using the titles 'Count' and 'Marquis'; however subsequent generations have refused to use 'Marquis' so as deny association with Donatien. Influenced by Voltaire, Sade philosophised on freedom of speech, yet took the measure to the extreme, advocating liberty to the detrement of religion, morality and law. Involved in numerous scandals, including poisoning and sodomy, Sade spent 32 years of his life occupying either prisions or insane asylums, including ten in the Bastille. Consequently many of his works were written in confinment, and indeed many feature themes which go against institutions of the day; a reoccuring motif being blasphemy against the Catholic Church. Sade's works gave rise to 'sadism' entering the language as a derivative of his name, and this is epitomised no more so than in his best known work, 'The School of Licentiousness'.
Posted by Kathryn at 17:23