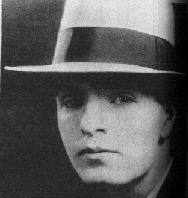 American novelist Cornell Woolrich, was born in 1903. Woolrich started his literary career by writing six works, including 'Cover Charge'; all whose inspiration is to be found in the 'Jazz Age' literature of F. Scott Fitzgerald. Yet after finding them commercially unviable, Woolrich turned his hand to detective novels, often writng under pseudonyms of William Irish and George Hopley. This proved more successful, leading to Woolrich being rated by biographer Francis Nevins Jr., as the fourth best crime writer of his era, behind only Raymond Chandler, Dashiell Hammet and Erle Stanley Gardner. Many of Woolrich's most famous works were adapted for screen, including Hitchcock's 'Rear Window', and Truffaut's 'The Bride Wore Black; this leads to him having the title of more film noir screenplays adapted from his works than any other writer. Woolrich died in 1968 at the age of 64; yet alcoholism and further trouble, meant that upon his death he weighed only 89 pounds. He left his $850,000 estate to Columbia University.
Posted by Kathryn at 16:54