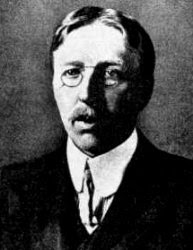 British novelist, poet and critic Ford Madox Ford was born in 1873. Born Ford Hermann Heuffer, he changed his name in 1919, due to unpopular German connotations following the First World War. War proved a continuous theme in Ford's life; he worked for the War Propaganda Bureau, producing two books and afterwards enlisted in the Welsh Regiment. The theme, not surprisingly, also ran through his literature, and inspired his most famous work, 'The Good Soldier'. The novel, originally called 'The Saddest Story' was supposedly started on Ford's birthday, to 'show what [he] could do'. Critics have praised the work, calling it, 'the best French novel in the English language' and Ford, 'one of the dozen greatest novelists of the century'. Ford is also known for his journalistic achievements. He founded both 'The English Review' and 'The Transatlantic Review'; publishing authors such as Thomas Hardy, Henry James and Joseph Conrad, and giving a publishing debut to D.H. Lawrence. Ford is supposedly the model for Braddocks in Hemingway's 'The Sun Also Rises'.
Posted by Kathryn at 18:07