Get your teeth into this... 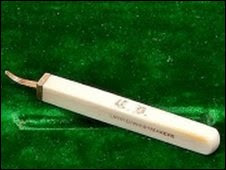 A more unusual literary lot has seen success in an international auction. A toothpick, used by author Charles Dickens, was sold in new York for $9,150 (£5,625), following a pre-sale estimate of £3,000-$5,000. The item, engraved with Dickens' initials, is made from ivory and gold and comes with a letter of authentication from Dickens' sister-in-law, in which she states that he used it right up until his death in 1870. Since his visit to the country, and subsequent publication of 'American Notes', Dickens has been hugely popular in the United States and this follows the opening of an exhibition in New York containing a handwritten manuscript of 'A Christmas Carol'.
Posted by Kathryn at 18:56