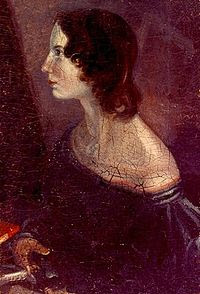 English novelist and poet, Emily Bronte died in 1848 at the age of 40. Part of the famous trio of sisters, know by respective pen names Currer, Acton and Ellis Bell, Emily had her first major publishing success with a joint collection of poems in 1846. Yet her real success was found in her gothic novel, 'Wuthering Heights', oublished in the same year as sister Charlotte's 'Jane Eyre'. The haunting and passionate love story is said to have been reflective of Emily's character; Charlotte stating it to be 'powerful and peculiar' and inspiring 'an anguish of wonder and love'. Such difficulty of character continued right until the end; she refused to allow a doctor to visit, only consenting to Charlotte's pleas a few hours before she died. Her death came at a time of great personal loss for the Brontes, her brother Branwell dying only three months previous, and sister Anne was to follow the next May.
Posted by Kathryn at 17:42