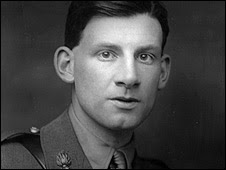 Cambridge University Library has raised £1.25 million to buy the archive of Siegfried Sassoon. The World War One poet and writer, contemporary of both Robert Graves and Wilfred Owen, is best known for works such as the 'Sherston Trilogy'. The archive includes a manuscript of Sassoon's refusal to return to duty following a serious wound, as well as diaries from his schooldays to war journals. Cambridge, at which Sassoon was an undergraduate, received the documents yesterday after a fundraising campaign which was helped by a £550,000 grant from the National Heritage Memorial Fund. The collection became available after the death of the poet's son in 2006.
Posted by Kathryn at 20:04