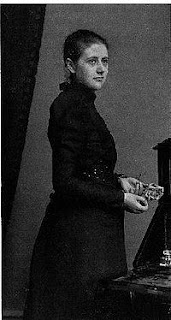 Children's author Helen Beatrix Potter, better known by just her middle name, died at the age of 77 in 1943. Schooled at home by a governess and largely ignored, Potter had little social interaction as a child, and relied instead on pets to provide her with the attention she craved. She is said to have had frogs, newts, ferrets, a bat and, of course, two rabbits; Benjamin and Peter, who were to form the basis of her first story. The setting for her many tales was inspired by frequent family trips to both Scotland and the Lake District; the latter became Potter's home some years later, when she bought Hill Top Farm - now a National Trust property. Potter's first attempts at writing were rebuffed by publishers for the lack of colour pictures. She decided to self publish, and soon gained an independent income from her writings. All together she wrote 23 books, the first and most famous of which is 'The Tale of Peter Rabbit'. Besides a sparkling literary career, Potter is also noted for her work is the field of mycology, or funghi.
Posted by Kathryn at 18:00

Labels: Beatrix Potter, on this day