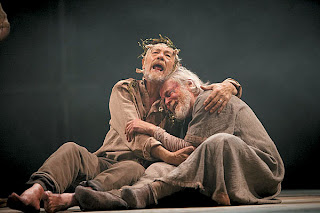 One of Shakespeare's greatest tragedies, 'King Lear' is noted for its first ever performance in 1606. During the reign of James I, a known advocate and admirer of Shakespeare's works, the play was performed in court, yet the actual date of its writing remain unknown. Undoubtedly one of Shakespeare's later plays, most scholars believe it to have been written between 1603 and 1606 due to other documentation of the time. However, there are a minority, most of whom doubt the authorship, that think it written earlier, given its parallels with contemporary history of 1589. The play, in its numerous adaptations, has always been noted for its depiction of human suffering and many other psychoanalytic interpretations have been offered as to its meaning.
Posted by Kathryn at 20:55