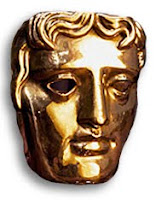 It's the film award season again, and the preview to the Oscars, comes in the shape of the BAFTAs. The British Academy of Film and Television Arts, will this evening present awards to the best actors, actresses, designers, composers and writers to honour the latest cinematic year. Many of this year's nominees, as with so many successful film franchises, find their roots in the literary world.

Numerous others join the list, and as the stars arrive, everyone waits in anticipation to see whether they are justly rewarded.
Posted by Kathryn at 20:01